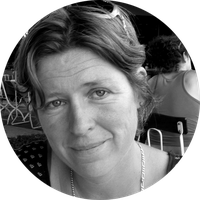 The TU Delft Urban Architecture graduation studios are set up on the premise that architecture is a highly contextual field. In this contribution to Workhome Studies, Eireen Schreuers reports from the teaching team's work with students on the theme of ‘Bricolage’ between 2020–21 – making do with what is at hand, inviting students to interpret, adapt, re-use and juxtapose the existing context, departing from its particular conditions and resources. With Paul Vermeulen, Aurelie Hachez, Leeke Reinders and Sam Stalker.

The TU Delft Urban Architecture graduation studios are set up on the premise that architecture is a highly contextual field. The them for the studio during 20–21 was ‘Bricolage’: a making do with what is at hand, inviting students to interpret, adapt, re-use and juxtapose the existing context, departing from its particular conditions and resources. The site for the studio was chosen to be both provocative and challenging. Students were given a poorly functioning shopping mall in the heart of the Dutch town of Nijmegen, and were asked to (re)design a complete environment, from which they would select one building to be worked out in detail. This raised various questions concerning the values and significance of the site: both immaterial (social, cultural, historical) qualities and its material structure. At the same time, the brief addressed the future of the city center and asked for strategies that could serve as alternative models for public and community life, living, recreation and work in the city.

A number of the students in the studio have worked with the idea to reconvert the existing mall into a place for (amongst others) work and live. Their motivation stemmed partly from the site’s position close to shops and offices, but mostly from the fact that a more diverse program could enliven and enrich the site’s significance, expand its variety of uses and spaces, beyond the current monofunctional shopping. An unexpected added incentive might have been the pandemic that forced the students to experience their room as a their word. In which they were forced to combine work and living. This led some of the students to more carefully consider the common areas.

The re-use of the vast concrete slab structure of the mall fand most notably the car ramp leading to a parking deck on the roof, posed for some quite a challenge. At the same time, it enabled specific work-live configurations, for example, entrances to the units from the rooftop, a solution that was at the same time materially sustainable. Due to the strategic position of the site, and the re-use of concrete structure, the work-live arrangements were high density projects and as a consequence either apartment buildings or urban terraced houses. The relation between work and other programs offered great variety. Some projects, such as Raphael’s and Robert’s, the work units were more conventionally positioned on the ground floor, combined in Roberts’ case with the shared facilities of communal kitchens, and outside spaces in the form of collective gardens or yards. In Tomi’s project, the units were internally connected for more flexibility, a theme that stood central in her project, specifically developed to cater for changing family compositions or life circumstances. The project of Alma combined an existing homeless shelter with artist’s ateliers, ….

Discussions in the worklive projects have revolved around the public, the collective, and the private. What could these projects offer to the city in the form of public spaces, how could the organization of the collective realm generate extra ‘breathing space’, and the form and flexibility of the individual units for the different residents, for whom the project would form the backdrop of their daily rituals of both work and living. The experience of the pandemic during this year stressed these last two points very vividly. The idea of the collective was also reflected in the organizational form of the projects that the students envisioned, which were as diverse as cohousing, combined atelier-dwellings, homeless shelter/artist ateliers and social housing, all stressing the socio-cultural potential of the mix. Many also contemplated the influence of the residents on the project and the financial structure, that exemplify the specific and alternative forms of living these kind of projects enable.

Alma Bouwens
The Formation of the Enclave

Alma Bouwens, The Formation of the Enclave. Urban cross section

The design is about the transformation of a shopping centre into a cultural enclave. The spatial motive is the conflict between the medieval city structure and a tight concrete grid of the existing shopping centre, resulting in characteristic coincidences. These characteristic coincidences form the basis for the design – from an urban point of view to the very detail.

By concentrating on designing the borders and thinking from their differences and similarities a collective square accompanied by telling facades i s created which stimulates a dynamic usage. By introducing an ensemble of different places creating different atmospheres next to each other, artists, musicians, people from the neighbourhood and reintroduced homeless people can relate to each other and share space and time.

Performers — ‘They talk by the means of music and are able to celebrate and to provide comfort. They add another layer of creativity’

Artists and Craftsmen — ‘The presence of artists and craftsmen form the foundation of the kinship. They bring a creative and inspiring atmosphere. They share knowledge and stories by talking and creation of tangible objetcs.’

Locals and Day-trippers — ‘A community centre organises events for people in the neighbourhood. Locals and day-trippers can experience, feel, see, hear things that happen as part of this programme or spontaneously.’

Resocialisation — ‘Former homeless people from Iriszorg have a facilitating role by supporting aspects of the program. They moved from a IrisZorg homeless shelter 100 meter away into new accommodation. Resocialisation is part of the project.’

The project Gemeente Molenort proposes an alternative reading to the way we deal with existing built conditions in our cities. The examined situation of a dysfunctional 50´s shopping mall poses no particular historic value. Just like Robinson Crusoe lived with what the island had to offer I followed the same mindset of Bricolage (A term coined by Claude Levi Strauss) and viewed the existing condition as a resource.

With the design I am exploring cluster apartments as a new (old) way to live together, tapping into the ideas of the Dutch Centraal Wonen movement from the '70s. Cluster apartments with flexible shared spaces allow the residents to combine living and working within one building. Following this model, the design became a question of private and shared. Small, individual apartments are equipped with their own small kitchen and bathroom. Those units then are organized within larger clusters, featuring the shared spaces. Those shared spaces allow for flexible use as a workspace during the day and gathering space for events during the evening. By offering several shared spaces on different levels the residents of the project can further distinguish the functions based on their needs. One floor for example can be dedicated to office work only, resulting in the creation of a coworking space. The flexibility of shared spaces is what enables cluster cohousing to function in a work-live setting.